Mosi really has a jungle room. This has gradually grown. On the wall, Mosi has panthera wallpaper from Studio Ditte with jaguars, black panthers and tigers. 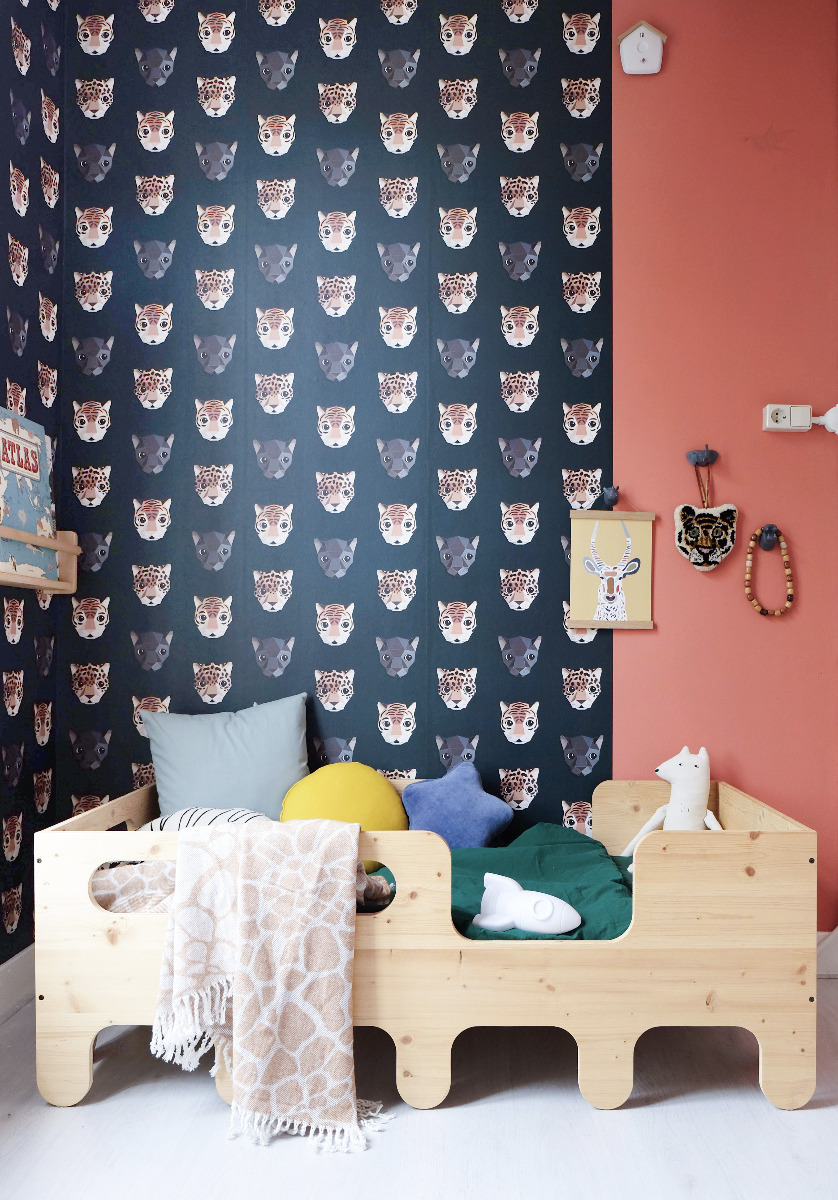 I like to shoot for @mostlymosi, I like to write for mamamosi.com and together with my sister I make posters for Jungle Mumble Design. This started with three colorful paintings of a giraffe, leopard and zebra that I made when I was pregnant for Mosi's baby room. The series of animal portraits in earth tones from our Etsy shop Jungle Mumble Design are based on this. Those are also still my favorite designs. 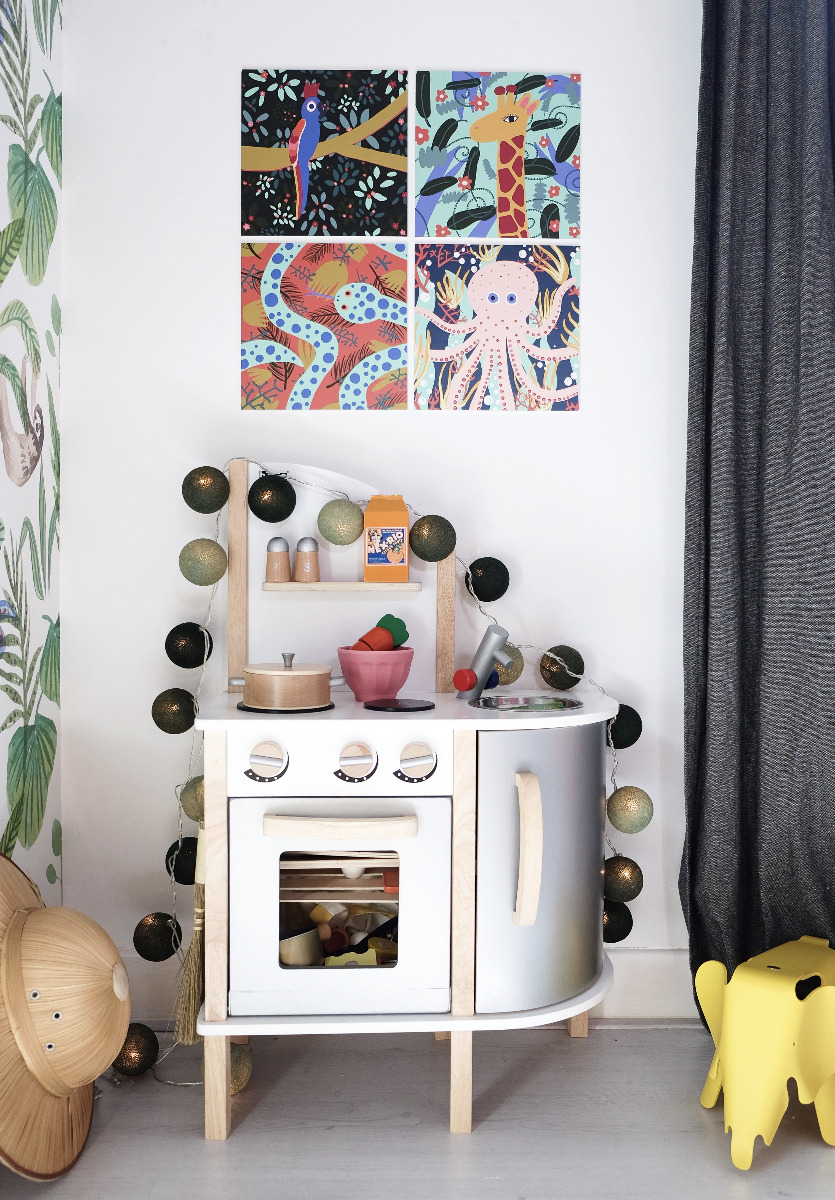 Mosi really has a jungle room. This has gradually grown. I have never consciously chosen a specific theme, but my (and his) taste ensure that the entire house has actually gotten a bit of the jungle vibe. I like to use green and natural shades, but in combination with a lot of color. That makes me happy. Furthermore, animals can be found everywhere. Not only on the wall, but also in accessories such as the monkey money box, elephant lamp and wall hooks. 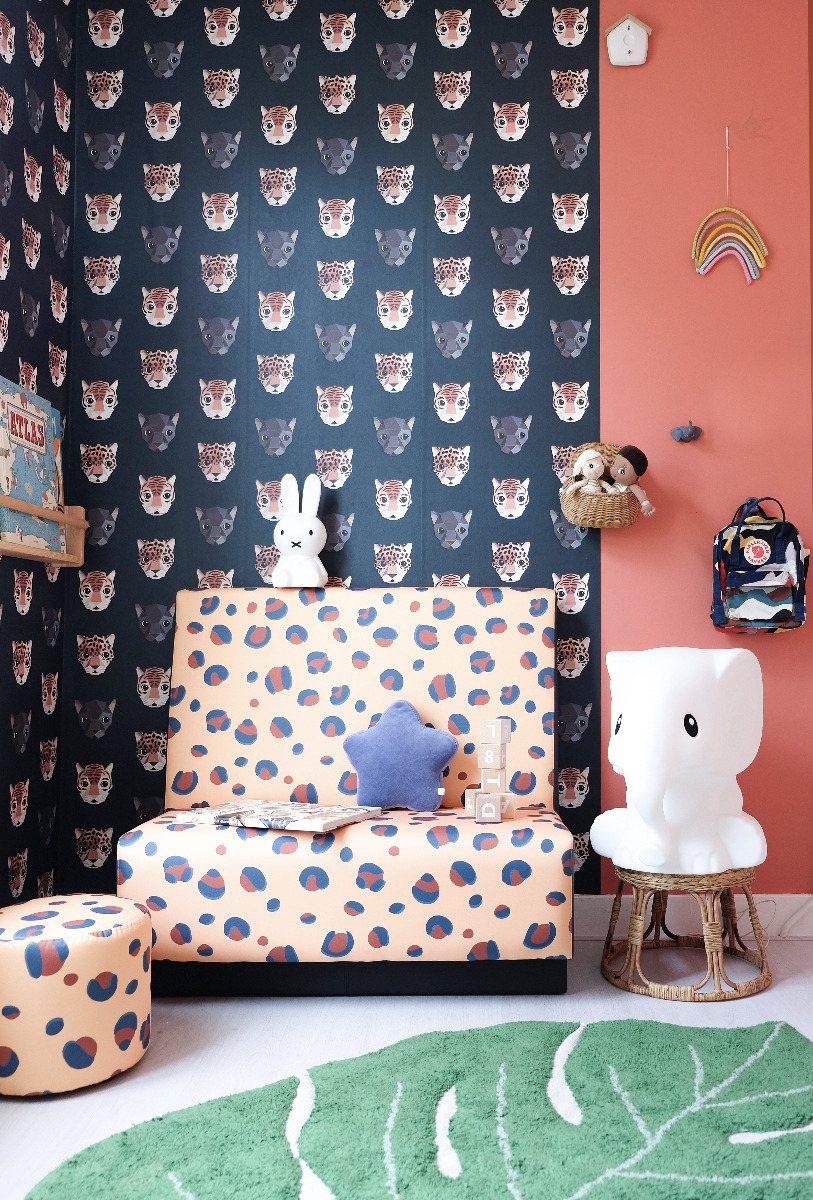 I like to be creative and I can do well with interior. Only another color on the wall can change so much. If you create a nice interior, it really influences how you feel. I love coming home because the interior suits us so well. I am always working on it and like to change, but that also ensures that it grows with us. And I also just love beautiful things, for example, I can really appreciate a well-designed chair. 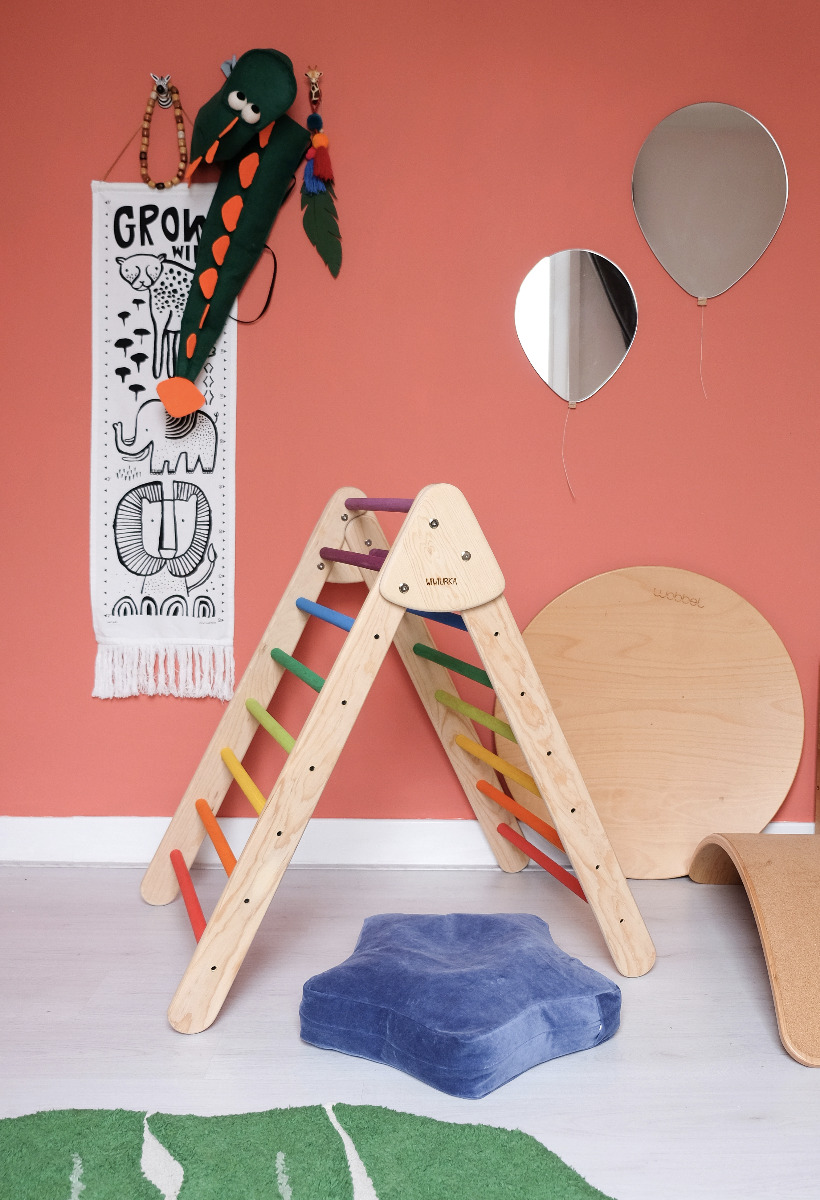 Mosi is happy to help

Mosi lets me know very well what he thinks about something, if he doesn't like something for his room then it won't happen either. He also has no explicit wishes for what he himself would like to change. I also think I know what he likes and I stay very close to his preferences. So he actually has a lot of influence on the interior. When choosing a new color for the wall, he goes to the hardware store and I involve him in the final choice. And with almost all jobs, from hanging wallpaper on the wall to drilling, he is my right hand. He then indicates, for example, the screws or the leveling instrument. He really likes that. 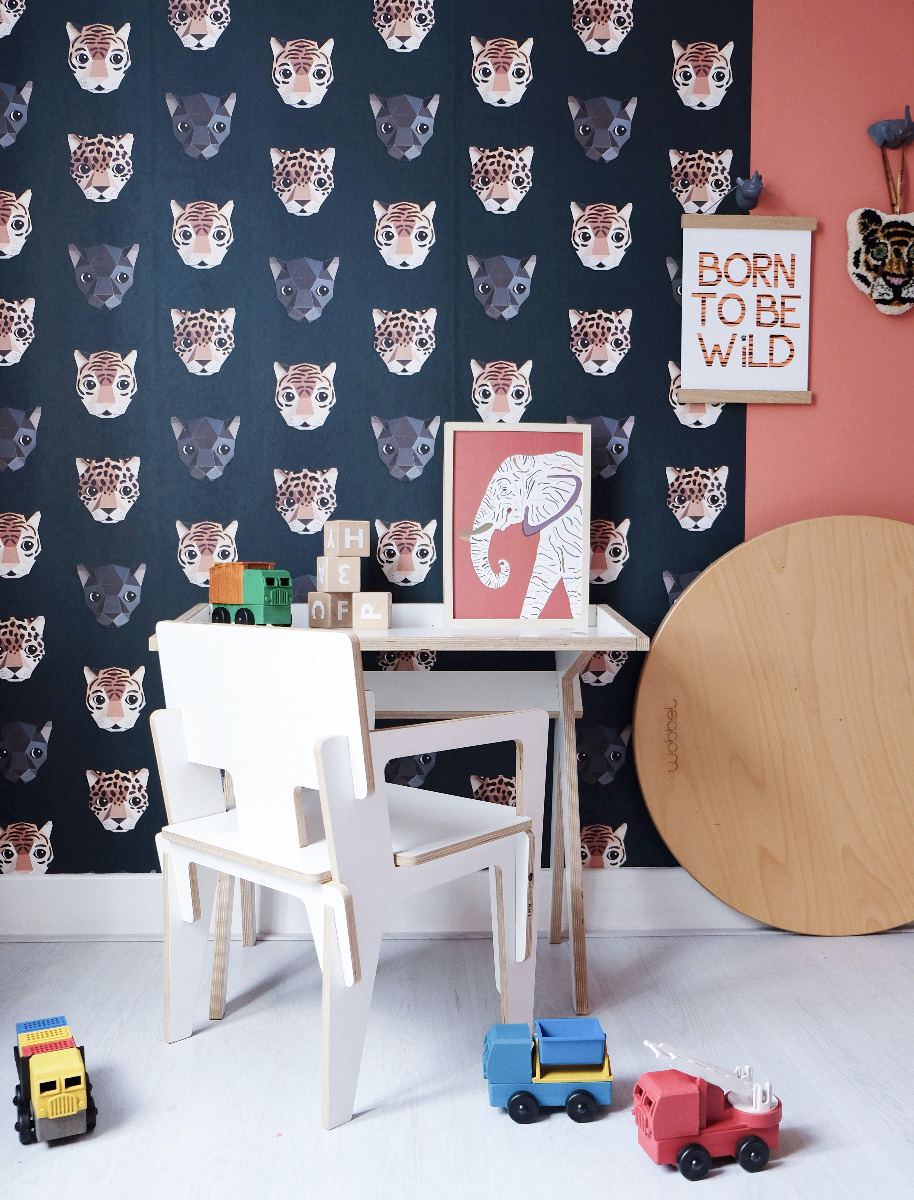 Ritual before going to sleep

We don't actually have a fixed ritual before going to sleep. Well, brushing teeth and putting on pajamas, but we actually read books more often when we wake up than before sleeping. Mosi sleeps easier if I quickly leave the room after he is in bed, otherwise it is much too cozy and he would rather not see me leave. That is why I like having a cozy evening in the living room, so that it is clear that the bedroom is for sleeping. On the couch he likes to sit on my lap and we'll talk about the day. 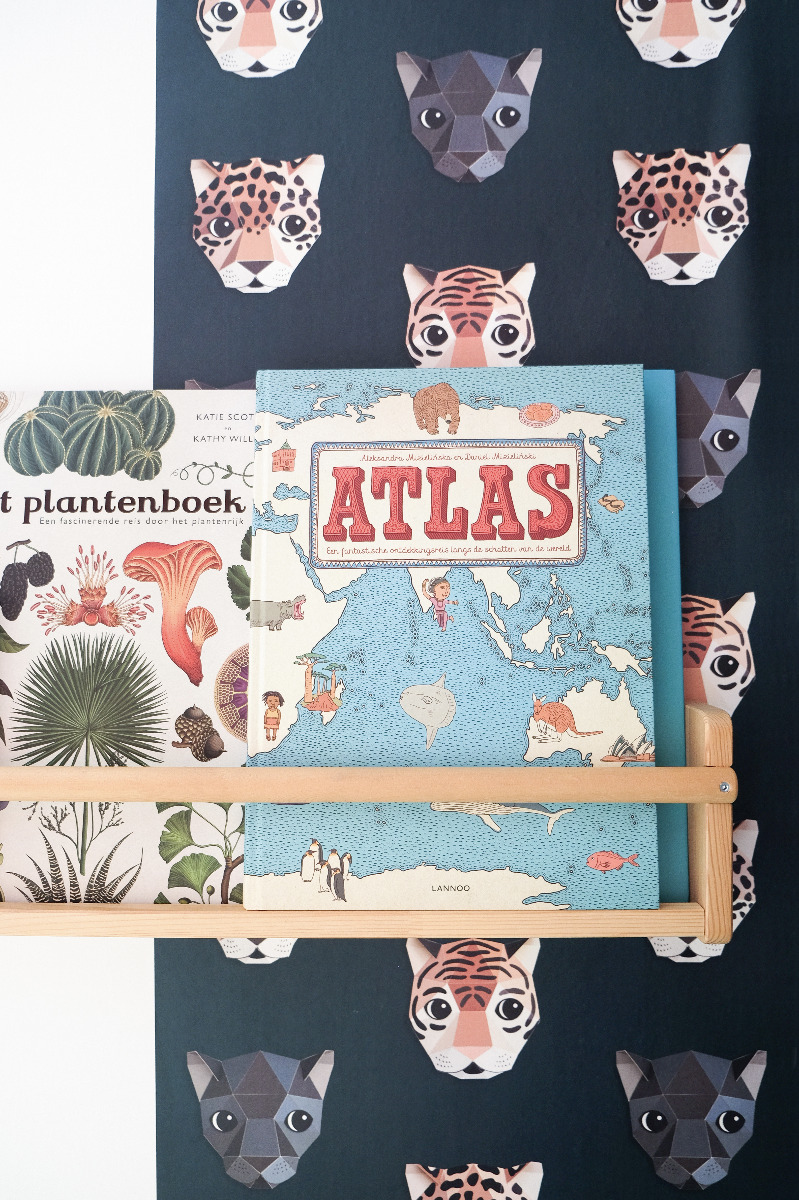 My most important styling tip is: it doesn't have to be finished in one time. I always change something small in Mosi's room and so the room grows with him and his needs. It was a lot quieter when he was a baby because it was mainly a bedroom, but now he also plays a lot in his room and I choose more color. This approach is easier to oversee than a major metamorphosis once in a while. For example, you put wallpaper on a wall in an afternoon and immediately give the room a different atmosphere. And make no mistake about the influence that the duvet cover alone can have. It is also quite a large piece of fabric on a junior bed; a certain color or print will then determine the atmosphere. I also opted for a fairly neutral basis; a bed of untreated wood and a lot of white. That fits with everything. Should he suddenly become completely crazy about cars, rockets or marine animals, then with a few adjustments he will have a room that is totally in that style.

Sign up for the newsletter. Receive a 10% discount on your next order and stay up to date with the latest products and special offers.